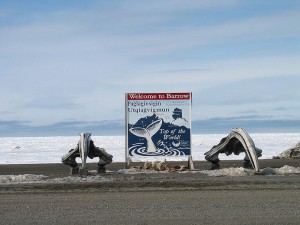 It’s hard to get excited about school when you’re reading a typical textbook written in the Midwest, and you live in a place with no trees, no sidewalks, and no elevators. That’s why educators on the North Slope are making a change. In the next installment of our “Being Young in Rural Alaska” series from the Producers of Kids These Days, reporter Anne Hillman looks at how the North Slope Borough School District is helping kids connect to academics and culture all at the same time.

ANNE HILLMAN: When Robin Stockton started teaching math in the North Slope Borough 16 years ago, she did it like everyone in the Lower 48, with examples like the arc of a foul ball to teach parabolas.

[Stockton: “They’d have it for one day but then they wouldn’t. It only made sense in my four walls. When you can’t apply it to anything, it doesn’t stick.”]

AH: So she made the math lessons apply to her student’s lives.

[Stockton: “Tying quad functions to whale bomb or to a jumpers height, it makes sense, it sticks, that’s the important part.”]

AH: The problems with standard teaching examples don’t start with abstract math; it starts with the books kids read in elementary school. Kids can’t relate to climbing trees or feeding chickens in a big red barn – those things don’t exist here. They know more about riding snow machines over the tundra and butchering whales with their families.

And that’s the motivation behind the North Slope Borough School District’s new teaching curriculum. It systemically incorporates Inupiat culture into every subject while still meeting all of the state educational standards.

AH: School Board President Debby Edwardson says the board and the community have been trying to incorporate Inupiat culture for years.

[Edwardson: “What we had done before was create lots of units in the classroom. What we’re doing now is completely regenerating our system with an Inupiat base. We’ve never done that before.”]

AH: The first step was to talk to all eight of the communities in the district and find out what they wanted their kids to know and be like when they graduated from high school. They used that to develop the Inupiat Learning Framework, which lays out the core values and ways of life that the community wants taught in their schools. Then, Robin Stockton and a team of other teachers and administrators used a proven method of curriculum development called Understanding By Design.

[Stockton: “The whole UBD process is having the end student in mind. And students being able to take the content they’ve learned in thirteen years of schooling and apply it to real world tasks.”]

AH: The new system meets the state’s standards and the community’s standards in an effort to get kids more motivated and involved. And district officials say it’s working. Attendance rates are at (the highest ever) *record highs* for the alternative school, the number of office referrals at the elementary school has been cut in half, and the drop-out rate is almost halved as well.

Fifteen year old Donna Sabo says that when last year’s end-of-the-year writing prompt focused on families, it made it easier for her to show her abilities.

[Sabo: “It was a good change because we know more about it. We understand it. Better than ‘what do you know about the trees or…. I don’t know, politics’…somewhere around there.”]

AH: The culture-focused curriculum also gives students the chance to learn more about their identities, something that school didn’t used to do. Sabo says she stopped doing cultural activities because she was too busy with academics and sports.

[Sabo: “I feel like now that I’m older I made a bad decision because I didn’t continue on with my cultural…whatevers.”]

AH: Now, as the district undergoes the lengthy process of cultural integration, students won’t have to choose between culture and academics. Middle school principal Carla Seavey says it gives the students a forum for educating each other.

[Seavey: “You might think that they all have the same experiences in terms of hunting or subsistence lifestyle, but they don’t all necessarily. A lot of our kids can learn from their peers about their own culture.”]

AH: And they can also learn about other cultures. Only 60 percent of the students in Barrow come from the region. Others hail from around the world, including Samoa and the Philippines. Middle school teacher Tony Bisson says the framework helps the students connect to each other to see how they are similar.

[Bisson: “I had one boy yesterday who said ‘yeah, I’m a hunter-gatherer, we gather rice in the Philippines.’ So it just makes a connection and whether or not, its not Inupiat, but it’s still hunting and survival. You see it in all cultures.”]

AH: Inupiat communities aren’t the only ones trying to incorporate culture into their schools. The Alaska Native Knowledge Network is amassing culturally-based curriculum resources and making them available to the state’s teachers. The University of Alaska Fairbanks has developed anelementary school math series based on Yupik knowledge and culture.  And in Southeast Alaska, the Sealaska Heritage Institute recently released coursework for grades six to eight – focused on Alaska Native history and the Alaska Native Claims Settlement Act.

This reporting series is a production of the Content Producers Guild and is made possible through funding from the Association of Alaska School Boards’ Initiative for Community Engagement program. For more photos and information please visit KidsTheseDays.org.