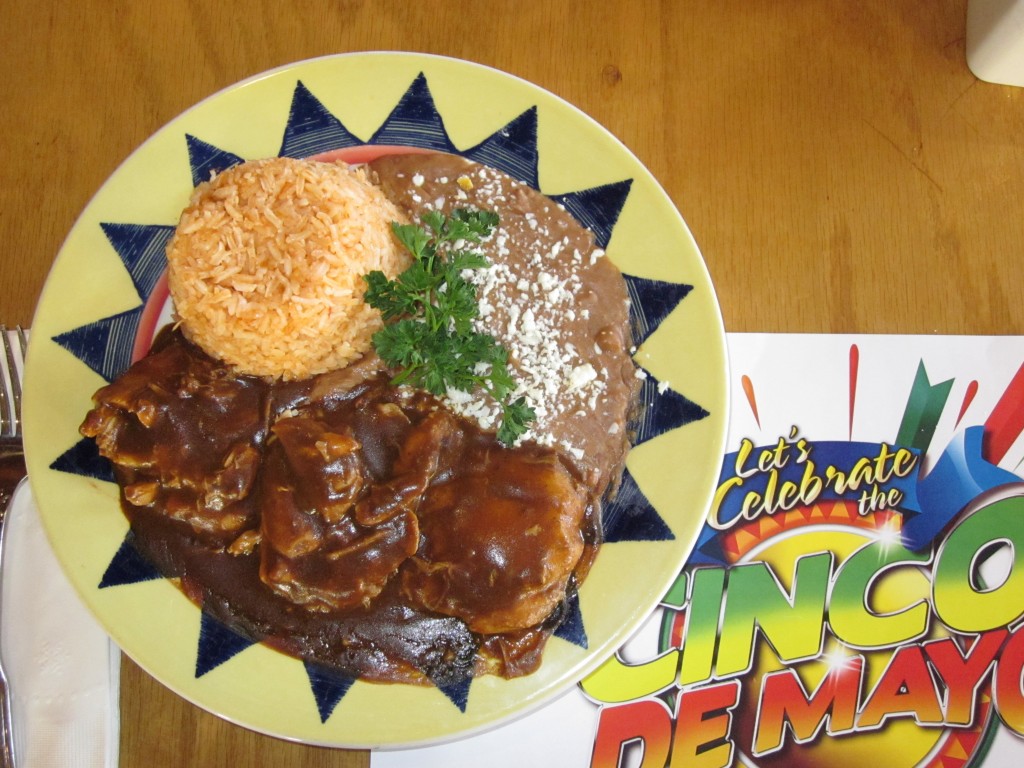 A hearty plate of chicken mole is one way to celebrate Cinco De Mayo. Scroll down for recipe

Saturday is Cinco de Mayo. The date has become synonymous with Mexican celebrations, and Anchorage restaurants and watering holes are marking the date with parties and special foods. In fact, parties will be happening all over the U.S. in honor of the day, although many Americans have little idea why.

Parties happen all over the U.S. in observance of the day, although it’s meaning goes way beyond Margaritas and guacamole.

Many Americans confuse the date with Mexican Independence Day, which is actually September 15. So why do we celebrate Cinco De Mayo?

“Every year, the Hispanic community, together of course, with the Mexican community, were celebrating Cinco de Mayo. And US citizens joined these celebrations, and now, most probably, Cinco de Mayo is more celebrated in the US than in Mexico.”

That’s Senor Javier Abud, the Mexican consul in Anchorage, who presented a primer on Cinco de Mayo as one of the consulate’s events tied to the day. He says Mexicans in California started the trend long ago, a year s after a Mexican victory in battle.

Cinco De Mayo marks a milestone in the Mexican struggle for independence, when at the Battle of Puebla, poorly trained and vastly outnumbered Mexican forces under the leadership of General Ignazio Zaragoza held back the well armed, expertly trained French army on May 5, 1862. The French general had bragged he would take Mexico with 6,000 soldiers.

The French were bent on conquest, and some historians say, were aiming to invade the US, which was embroiled in it’s own War Between the States at the time.

Although the Battle of Puebla did not win the war, it slowed the French advance and served as an inspirational event, and is celebrated as such in Mexico. And increasingly, the day is observed in the US.

“Mole is like a chocolate sauce.” ‘but it’s spicy’. “Yes, it is. They have their own seasonings. It has onion, salt, chicken broth, and on top, they put sesame seeds on top.”

So, why is the day important to her?

“Because I am from Mexico, and I am very proud of my heritage. And Cinco de Mayo, I guess, it’s for everybody.”

While the day may be creating a new tradition in the U.S., much older traditions seem to be taking root in a younger generation

“I tend to be very patriotic when it comes to my culture. My parents, my family, made sure I was raised to know my roots, to know where I came from really. I was born here in Alaska, but, every since I can remember, my family would keep family and culture root here. I’ve always loved ranchera. I think that’s why I keep going, my love for it. ”

Dressed in her “vestido de charro” or traditional Mexican singer’s outfit, Zaide is carrying on a Mexican tradition, and sharing it with Alaska.

Consul Abud says Cinco De Mayo has captured the imagination of Americans, and provides an opportunity for Americans and Hispanics from multiple national origins to celebrate common values and traditions.

Mexican consulates all over the US are hosting Cinco de Mayo events this week.

Mix mole paste with the chicken broth, (needs to be hot) not too watery. Fry the paste and add salt to your taste, then add chicken breasts and let it cook more. Serve mole Poblano with rice and beans, put sesame seeds on top of mole.

Cook red tomatoes with the Serrano chiles in water, grind garlic and the piece of cinnamon. Then add sesame seeds and fry in oil adding salt to your taste, add chicken broth, after cooking for some time add the pieces of chicken. Serve with rice and beans.

1. Heat oil in a large saucepan over med.

4. Cover and cook until onion is almost tender, stirring occasionally, about 10 minutes.

5. Mix in chili powder and flour, stir for 3 minutes.

10. Whisk in chocolate; season with salt and pepper, if desired.

APTI Reporter-Producer Ellen Lockyer started her radio career in the late 1980s, after a stint at bush Alaska weekly newspapers, the Copper Valley Views and the Cordova Times. When the Exxon Valdez ran aground in Prince William Sound, Valdez Public Radio station KCHU needed a reporter, and Ellen picked up the microphone.
Since then, she has literally traveled the length of the state, from Attu to Eagle and from Barrow to Juneau, covering Alaska stories on the ground for the AK show, Alaska News Nightly, the Alaska Morning News and for Anchorage public radio station, KSKA
elockyer (at) alaskapublic (dot) org  |  907.550.8446 | About Ellen