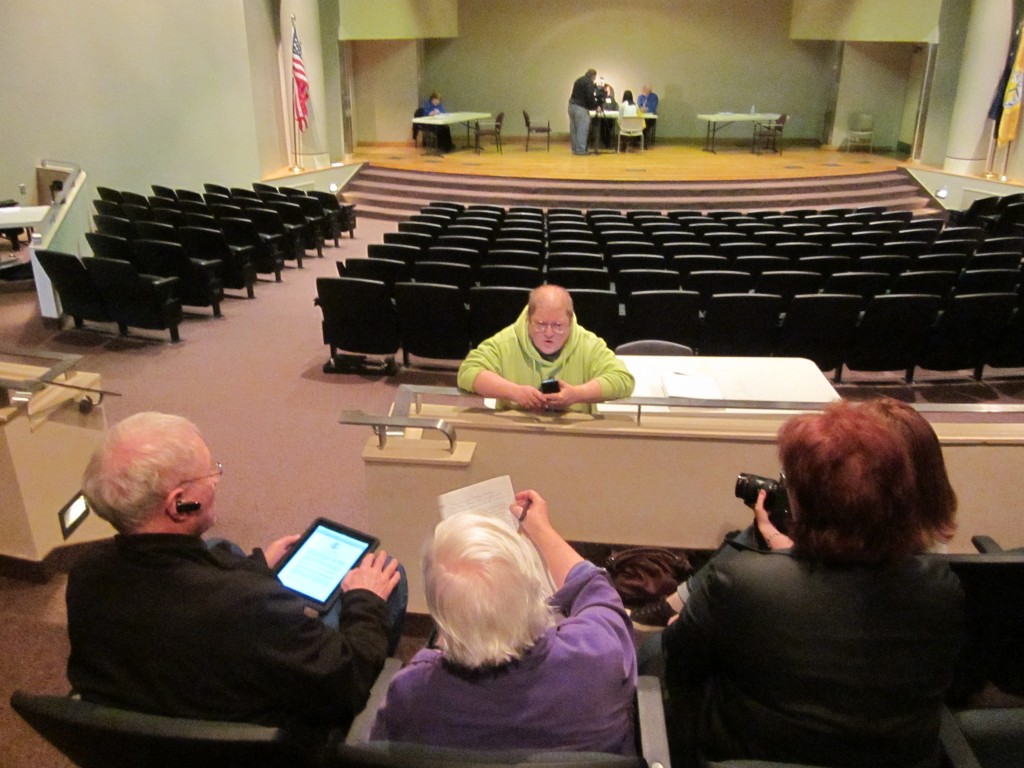 The Election Commission for the Municipality of Anchorage will hold a final public meeting today (Monday) to interview people who were unable to vote in the April 3rd Municipal Election due to ballot shortages. The Commission began interviewing voters Saturday at the Loussac Library. KSKA’s Daysha Eaton was there and filed this story.

Dozens of voters sat down with members of the Election Commission in the Loussac Library’s Wilda Marston Theatre to tell their stories in one-on one interviews. Jed Whittaker was one of them. He voted a question ballot, and he was angry to find out that his vote was not counted. He argued with Commission member Sue Kinney.

About half of precincts ran out of ballots during the April 3rd Municipal Election, resulting in a huge number of question ballots. And some voters reported they were turned away at the polls. Mandy Gershon was an election worker at Muldoon Baptist Temple. She brought a list of names of people she had to turn away and described the chaos on election night.

“We ran out of question ballot envelopes. So I went to Creekside to find out what they were doing. They said they were taking a list of names. So we started doing that once I got back. But then I went over to Muldoon Elementary cause I knew they had put in a request for more question ballot envelopes cause they had borrowed some of ours. Um they hadn’t re-copped yet, so we ah tried going to Bartlett, but they only had 5 left so they weren’t going to share. So then I went back and started making a list of names. But by then the chairman was telling people they couldn’t vote there.”

Other voters and election workers reported trouble reaching the clerk’s office with questions on election day, broken seals on ‘acuvote’ memory cards and running out of ballots and envelopes. Gwen Mathew is the Chairman of the Election Commission. She says the commission is collecting as much information as possible.

“We are here to ascertain if they were able to vote or if they weren’t. How they were processed. That type of thing. We’re also interviewing precinct chairs to find out what went on in their precinct that day. We’re attempting to find a qualified answer. A idea about how many people actually were unable to vote. And from this mass of information that we are collecting we will make recommendations to the Assembly.”

The ACLU of Alaska is collecting sworn affidavits from people who say they could not vote and calling on the Anchorage Assembly to appoint an independent investigator. The Assembly says they’re waiting on a report from the Commission before making a decision. Mathew says it will likely be another week before the Commission presents their report to the Assembly. Today’s special meeting is the last opportunity to be interviewed by the election commission in person. The second and final public meeting of the Election Commission begins at 4:00 pm at City hall and runs until 7:30.

People unable to attend the meeting may email the commission with their story at Election 2012@muni.org. You must include you full name, precinct name or number, and any other relevant information.