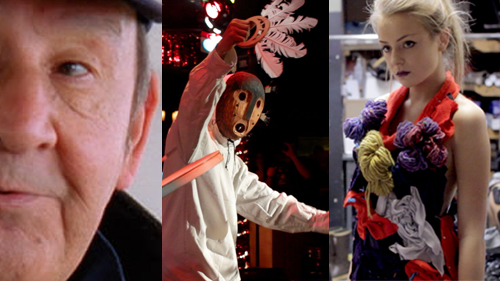 From isolated internment camps in Southeast Alaska to Congress and the White House, this is the incredible, untold story of Aleut Americans’ decades-long struggle for human and civil rights. In 194, as World War II invaded Alaska, Aleut Americans were taken from their homes and removed to abysmal government camps 1,500 miles away. As the Aleuts prayed for deliverance, “friendly forces” looted their homes and churches in the Aleutian and Pribilof islands. Those who survied would fight for their rights – in the nation’s courts and on Capitol Hill.

Filmed at Tap Root in Anchorage, this is a live concert interview with a band that is known for their dancing as much as their musical performance. We also sat down with the band for an interview about  thier Yup’ik roots.

If you missed this sold out event, prepare to sit front row for the craziest fashion show that only Alaskans could envision. Our cameras were allowed behind the curtains to capture some of the excitement and nerves backstage.