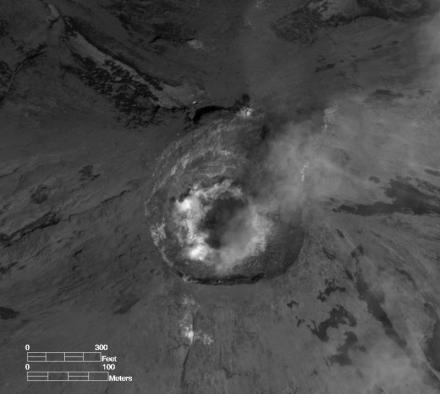 The long-forecast eruption of Cleveland Volcano has finally happened.

The volcano sent up a 15,000 foot ash cloud at around 8 o’clock on Thursday morning.  The Alaska Volcano Observatory has been keeping tabs on Cleveland since July, when a lava dome in the crater started to grow.  There are no seismic instruments on the volcano so the Observatory relies on satellite imagery for monitoring.  Geophysicist Sheryl Searcy says that’s how they first spotted the plume, which she calls a relatively minor explosion.

Cleveland is on unpopulated Chuginadak Island, 115 miles southwest of Unalaska.  The volcano lies on a major flight path and when it erupted in 2001 it sent an ash cloud up to 39,000 feet, disrupting international air travel.  Searcy says that’s unlikely with this plume because it’s so much smaller.

The Observatory is monitoring the volcano for further eruptions, but Searcy says it’s probably done.

The ash cloud is traveling south-southeast and Public Safety Director Jamie Sunderland says is not expected to drop ash on Unalaska.