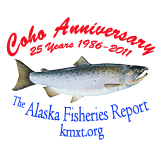 Coming up this week: As Alaska’s salmon season winds down, it’s apparent the statewide catch won’t equal projections – except, in Southeast where they’re breaking records; Some Pollock B fishermen are taking a break in the middle of the season; and what fishermen’s wives like and don’t like about their husbands going to sea. We had help from KFSK’s Matt Lichtenstein in Petersburg, KUCB’s Alexandra Gutierrez in Unalaska, KPLU’s Robin Cedar and Jake Ellison in Tacoma, and Fish Radio’s Stephanie Mangini in Kodiak.

Jay Barrett is the news director at KMXT in Kodiak.

LISTEN: Primaries or ranked choice? Vote Yes and Vote No make their case on Ballot Measure 2.