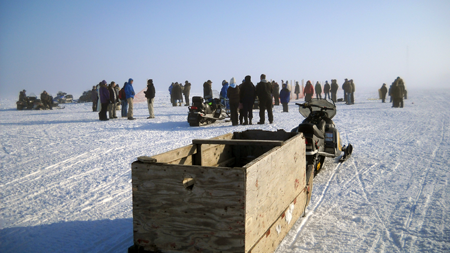 The 2011 Kobuk 440 wrapped up at 9:50 Sunday morning when Pete Kaiser of Bethel appeared out of the fog to cross the finish line on the ice in front of Kotzebue.

This marks the first big win for 23-year-old Kaiser, who has placed in the Kuskokwim 300 and the Iditarod.

Pete Kaiser’s dad Ron was among the crowd at the finish line, he says his son has won some races but nothing of the caliber of the 440.

Mushers had extraordinarily good weather and good trails for a race that can be known for some tough conditions. Past years races have seen severe cold, snow storms that pinned mushers in place, or dogs swimming through overflow.