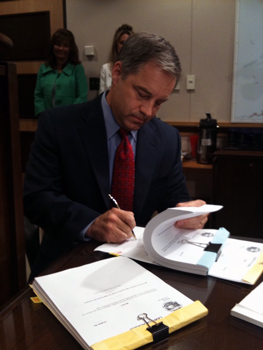 Governor Sean Parnell announced his approval of the State Operating and Capital Budget for FY 2011 – cutting a total of $336 million.

Cut from this years operating budget was $35 million dollars that were originally appropriated for Denali Kid Care as well as $300 million from the capital budget.

Some of the governor’s approvals included $1.26 billion for transportation projects, $88.5 million for water and sewer projects, $451 million for K-12 education and the university, $123 million for deferred maintenance and $77 million for renewable and other energy projects.

Tune into APRN’s Alaska News Nightly tonight at 6:00 pm on 91.1 FM for more information on the governor’s vetoes, including his controversial decision to veto an expansion for Denali Kid Care.

Photo by Annie Feidt, APRN – Anchorage —  Governor Sean Parnell signs off on the FY 2011 budget for the state of Alaska.