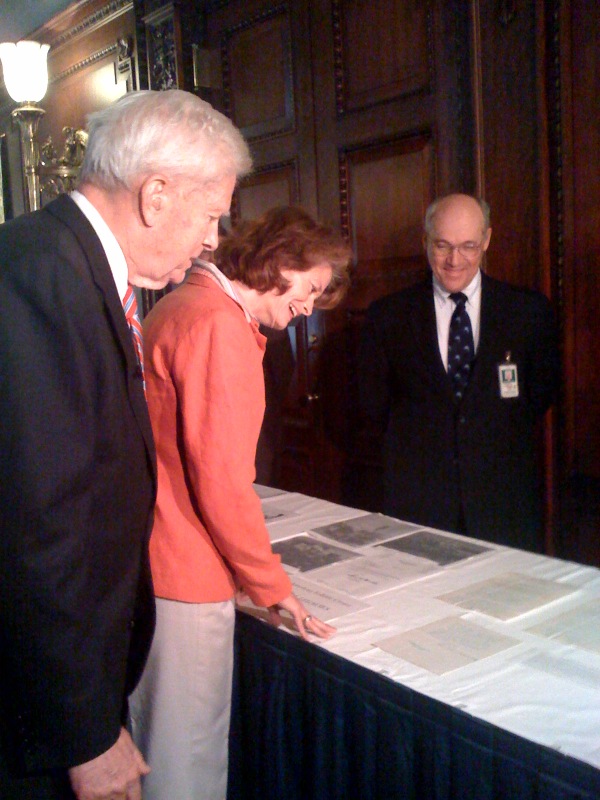 Library of Congress Houses Treasures of Alaska
Libby Casey, APRN – Washington
Among the millions of maps, photographs, documents and recordings at the Library of Congress are thousands of items related to Alaska’s history.  Senator Lisa Murkowski  (R-AK) toured some of the collection’s highlights Friday in honor of the state’s 50th anniversary.

State to Get $4 Million in Stimulus funds for Forest Projects
Libby Casey, APRN – Washington
Alaska is in line for about $4 million in federal funds for forest service projects. The money is from the stimulus package, and is in addition to $40 million in economic recovery Forest Service money already headed to Alaska.

UAF to Get $1.5 Million for Regional Campuses
Mike Mason, KDLG – Dillingham
The University of Alaska Fairbanks is getting around $1.5 million for two of its regional campuses.

Enrollment Up on College Campuses
Casey Kelly, KTOO – Juneau
Universities and community campuses around Alaska are buzzing with a lot more activity so far this school year. Enrollment at some sites is up about 30-percent from last year. The downturn in the economy is certainly one factor.

Railroad Announces Big Layoffs
Ellen Lockyer, APRN – Anchorage
The venerable Alaska Railroad is the latest corporation to announce that hard economic times are taking a toll.  Officials at the state owned transportation utility say one in five jobs will be cut by the end of the year.

Disney Cruise Lines Coming to Alaska
Ed Schoenfeld, CoastAlaska – Juneau
Another cruise company is adding Alaska to its itinerary. Disney Cruise Line on Friday announced it would make its first sailings to the state.

Wrangell Ranger District Getting New Cabin
Lisa Phu, KSTK – Sitka
A new cabin is currently being installed in the Wrangell ranger district. Not only is it the district’s first road-accessible cabin, it’s also the district’s first log cabin. The logs are second growth timber from the Starrigavan Valley in Sitka.