Lawmakers are considering direct payments to Alaska residents to help offset the high cost of energy. Plus, a rare Aleut mask that was almost lost to a private collector comes home to the Aleutian Pribilof Islands Association. Those stories and more on tonight’s Alaska News Nightly, broadcast statewide on APRN stations.

Individual news stories are posted in the Alaska News category and you can subscribe to APRN’s news feeds via e-mail, podcast and RSS.

Juneau electricity boss reflects on April avalanches, looks ahead
Weld Royal, KTOO – Juneau
Bill Corbus, chairman of the board of Juneau’s electric utility works in a two-room office downtown. It’s on the second floor next to a bank of elevators, but the 70-year-old Corbus uses the stairs — in the name of conservation. He says the April avalanches that severed Alaska Electric Light and Power’s connection to low-cost hydropower are the biggest calamity ever to hit the company.

Exxon Valdez plaintiff tax protections missing from Farm Bill on eve of passage
Amy Bracken, KCHU – Valdez
Congress has agreed on a final version of the U.S. Farm Bill. It now goes to the president to approve or veto. The legislation includes crop subsidies, increased food-stamp funding and tax breaks to racehorse owners. But one provision is conspicuously missing. 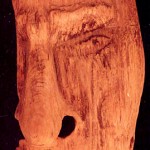 Centuries-old Aleut mask moves to new home in Anchorage
Annie Feidt, APRN – Anchorage
A rare wooden Aleut mask has a new home at the Aleutian Pribilof Islands Association (APIA) in Anchorage. APIA rescued the mask from an auction at Sotheby’s 10 years ago. Since then, it’s been on display at the Anchorage Museum. But now APIA has its own place of honor for the mask at its new building in Anchorage. (Photo by Dr. Doug Veltre) 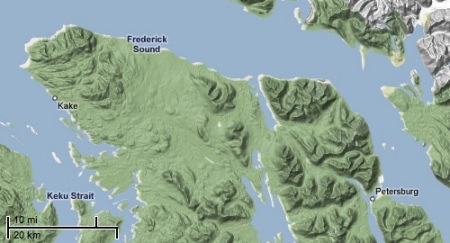 New Petersburg-Kake road driving transportation discussion
Ed Schoenfeld, CoastAlaska – Juneau
State officials are moving forward with building a road connecting Petersburg and Kake. They say the link between the two island communities would support commerce as well as construction of a new power line. But the plan is raising concerns.